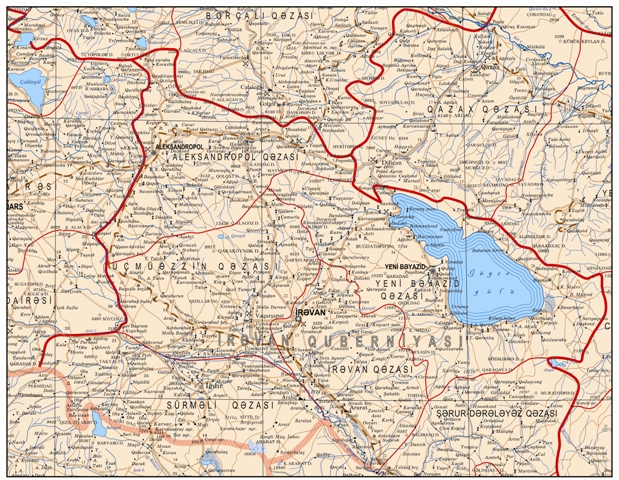 The newspaper "Elm" published an article by the director of the Institute of Geography. acad. G. Aliyev of ANAS, academician Ramiz Mammadov and head of the department of cartography, Ph.D. in geography Shamil Azizov "South Caucasus, Map of 1903": Historical and Geographical Maps Exposing Armenian Toponymic Aggression as an Argument. “South Caucasus. The map of 1903 was published in 2012 by the order of the President of Azerbaijan Ilham Aliyev based on the "Map of the Caucasian Military District of 1903" in English, Russian and Azerbaijani languages with a total circulation of 75,000 copies. The article notes that this important map was published in order to properly inform the world community and expose provocative maps and atlases that distort the borders of the administrative-territorial units of Azerbaijan, territorial integrity, historical and geographical names. Here, in connection with the publication of the map, information is given on Russian military cartography and its role in the publication of maps, the significance of historical and geographical maps in the study of history, cartography and toponymy, etc. nteresting information about the map is presented, an analysis of territorial toponyms, as well as oronyms and hydronyms on the basis of the map is given. it speaks about the dynamics of changes in individual place names in Armenia on the basis of maps of different periods. Researchers have shown that the map provided by the Russian military topographic service for the army covers a fairly large territory and contains many different elements: cities, towns and villages, provinces, regional centers, castles, fortifications, as well as rivers, lakes, etc. In addition, the map accurately displays customs posts, postal and railway stations, road networks, borders (state, provincial, regional), as well as destroyed objects.

It is argued that the territory of Azerbaijan was actively mapped in the 18th and 19th centuries. To meet the military needs of Russia, topographic work in Azerbaijan in the 19th century was carried out with particular intensity. “South Caucasus. The 1903 map indicates that the overwhelming majority of geographical names on the territory of Armenia are of Azerbaijani origin. It is known from archival documents that only in 1946-1968 more than 300 Azerbaijani-Turkish toponyms were replaced by Armenian names. Today the number of such changed toponyms exceeds one thousand. Official state decrees, like their own historical documents, expose the shameful Armenian policy, which is the genocide of Turkish place names.

The shamelessness of the Armenian aggressors knows no boundaries. They are encouraged both in the past and now and are run by patrons and the Armenian mafia. Research shows that the local names and place names of the Azerbaijani people, who settled in the territory of present Armenia many centuries ago, cannot be erased from historical sources and geographical maps. History remains, and it is impossible to rewrite it to please someone.