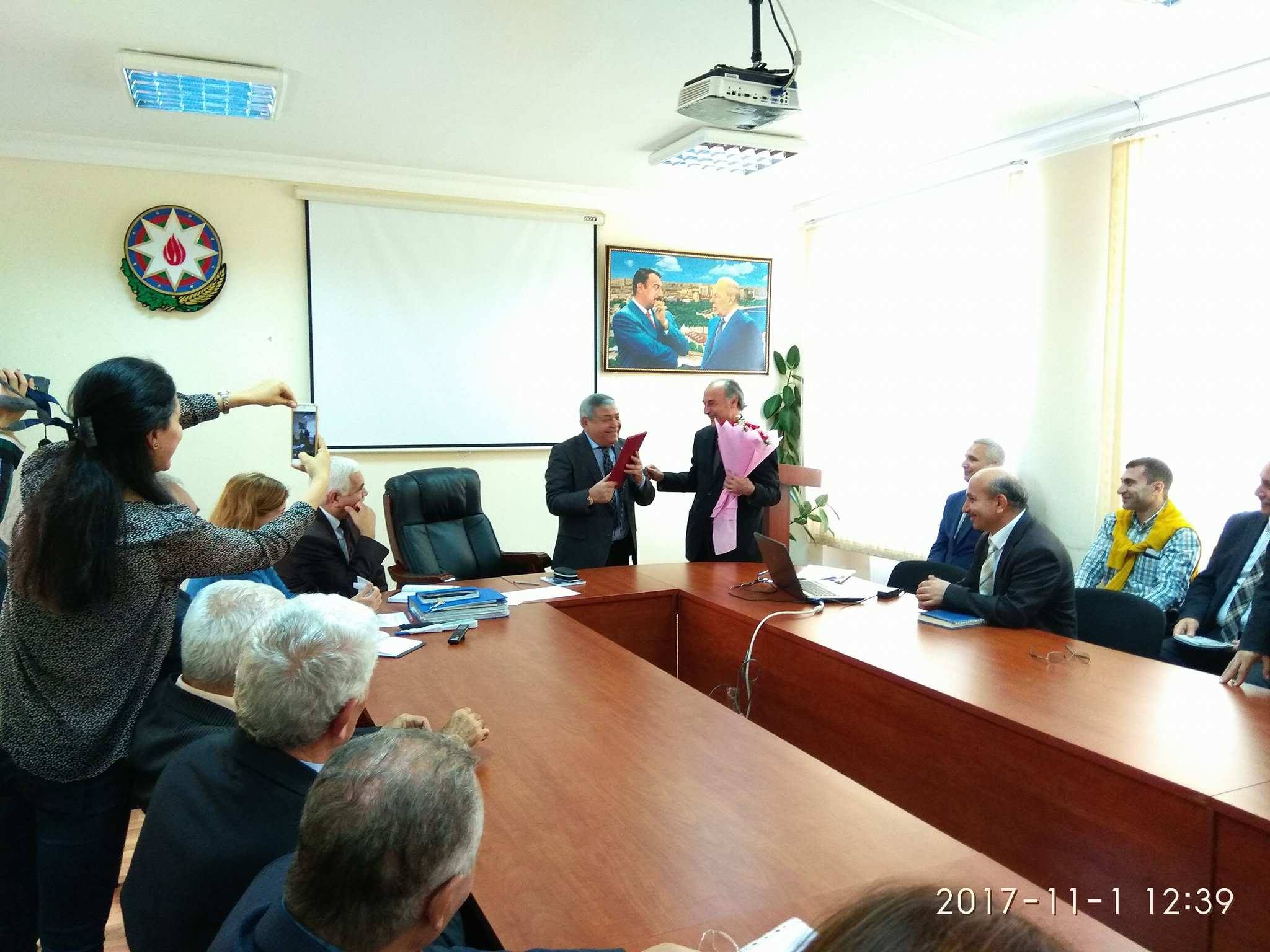 November 1, the joint meeting of the Scientific Seminar and Academic Council was held at the Institute of Geography named after acad. H.Aliyev of ANAS. Academician Ramiz Mammadov, who presided at the meeting, acquainted the participants with the agenda.

Then the chairman of the Trade Union, Abil Akhverdiyev, spoke about the scientific activity of the head of the Department of Geomorphology and Natural risks, D.Sc. Huseyn Khalilov, who turned 75 years old. Ramiz Mammadov congratulated the scientist on behalf of the Institute staff and wished him good health, longevity and creative success.

Academician R.Mammadov spoke about the result of the Second Turkish-Azerbaijani Geography Days held in Izmir from 24 to 27 October 2017 and the warm reception provided by the Turkish side.

He particularly emphasized that the idea of a prominent geographer, academician Budag Budagov, about the creation of the linguistic diversity of the geography of Turkic world was accepted with pleasure. This initiative aroused the interest of Academician Akif Alizade, who expressed his support for the Institute of Geography in this matter.

During the meeting of the Council, a working group of 6 people was approved to prepare the work on linguistic diversity. It was also decided that the papers of scientists along with the reports at the Baku-Izmir conference should be prepared and published in scientific journals of both countries. Leading officer of the Department of Paleogeography, PhD in g/m, Rasid Fataliyev, made a presentation on the “Abdal Valley waterfalls” in Tovuz region of Azerbaijan. The speaker spoke about the result of the expedition to Tovuz on October 23-26, together with the D.Sc. Huseyn Khalilov and amateur geologist Jalaladdin Gasymov and answered questions. He demonstrated the film, made by J.Gasymov “Sulttan Falls”. At the suggestion of R.Mammadov, it was decided to publish a jointly prepared article of the expedition members in the journal “Geography and Natural Resources”.

Then the report of the chief scientific officer of the Department of Climate and Agroclimatology, PhD in geography Hasan Nabiyev, on “Mudflows and climatic factors of their formation in Azerbaijan” also took place. Having studied the distribution of mudflows, their relationship with solar activity, atmospheric circulation, the scientist achieved a number of results. He said that the increase in solar activity is accompanied by an increased risk of muflows.

The chairman of the Trade Union committee, Abil Akhverdiyev, reported on the event on the nature, envisaged on Shamakha-Gabala, dedicated to the 110th anniversary of the prominent naturalist, academician Hasan Aliyev, who was director of the Institute of Geography. He also reported on the land area allocated for the Academy staff in the Saray Absheron settlement.

The meeting concluded its work.