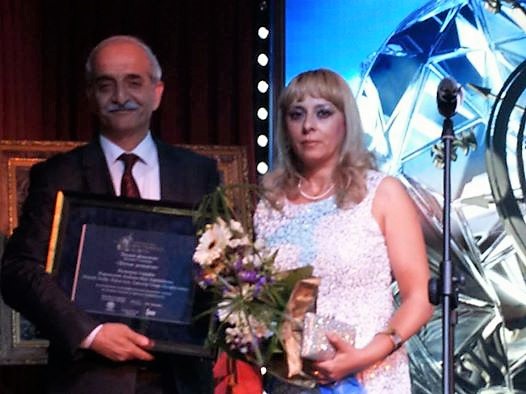 May 13, 2016 in the Russian city of Krasnodar was held IV awarding ceremony of the prestigious National Prize “Crystal Compass”.

It is the first prize in the field of geography, ecology, conservation and promotion of natural, historical and cultural heritage of the Russian Federation which is awarded annually on a competitive base. Chairman of the Board of Trustees is the Russian President V.V Putin, and the president – Minister of Defense S.K. Shoigu. Having won in the category “Scientific achievements” on the contest “Crystal Compass” of the Russian Geographical Society (RGS), the monograph “Eco-geomorphological dangers and risks in the Major Caucasus” has won the right to participate in the finals. This monograph was written by deputy director of the Institute of Geography named acad. H.A.Aliyev of ANAS, corresponding member Elbrus Alizade and the leading researcher of the institute, PhD in geography, docent Stara Tarikhazer. The project has reached the final together with the Russian-Chinese and awarded Diploma of the finalist of National prize “Crystal Compass” of the Russian Geographical Society. The monography “Eco-geomorphological dangers and risks in the Major Caucasus” has been published in Moscow in the publishing house of Moscow State University “MaxPRESS” in 2015.