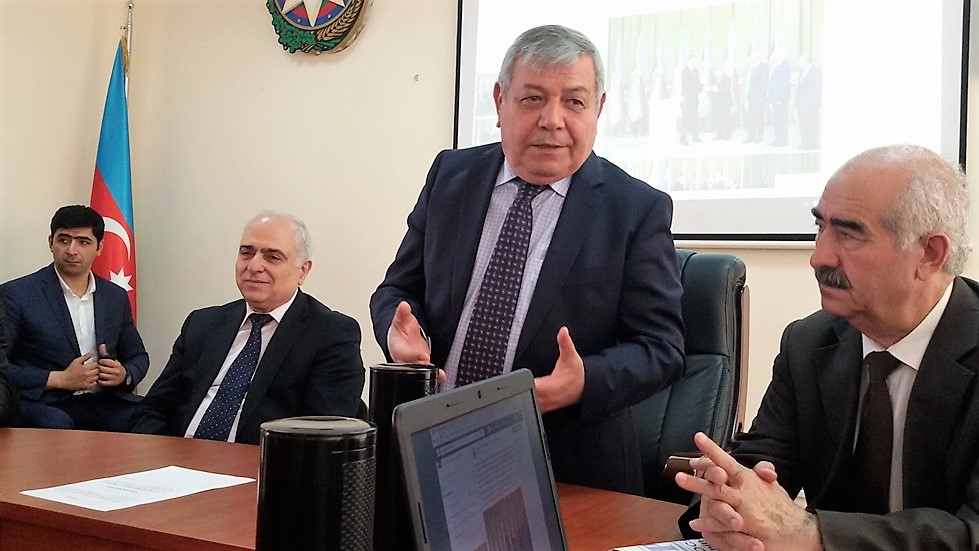 Academician Fakhraddin Gadirov, academician-secretary of Department of Earth Sciences and Dadash Huseynov, deputy director for science of the Institute of Geology and Geophysics of ANAS participated in the event.

First, all participants honored the memory of deceased head of the Department of Geomorphology and natural risks, Doctor of Science in geography Khalid Tanryverdiev. They told kind words about him such as wonderful person and scientist, and mentioned his contribution to geographical science.

Then, was shown the recoded speech of the academician Ramiz Mammadov at the prize presentation ceremony the 28th may, Day of the Republic of Azerbaijan.

F.Gadirov spoke about a greater sense of pride that he had experienced about the awarding of state prizes for a very valuable and necessary for our country three-volume monograph “Geography of the Republic of Azerbaijan”.

Given the importance of the labor, he found it necessary to carry out its translation into Russian and English. He informed that the preparation of the Atlas of Emergency Situations of Azerbaijan, entered into a strategic plan of national importance, has been entrusted to the institute of Geography as a result of trust and faith in his leadership and staff, and expressed confidence that this task will also be done. He also noted that scientific researches which are performed by the scientists of the Institute are of great importance. The head of the Earth Science Department said that thank to the assistance of the president of ANAS, academician Akif Alizade, once a week, a television program will be held by AzTV on the channel “Elm”,on the theme of scientific innovations. He added that the Institute of Geography should prepare for the second transmission, dedicated to the awarding of state prizes.

Next, Deputy director for science, corresponding member of ANAS Elbrus Alizade stressed the high role of the employees of the Institute of Geography fulfilled his professional duty in the preparation of  three-volume encyclopedic monograph “Geography of the Republic of Azerbaijan” and said “this prize is as a reward for each of you”. He also noted the role of geographers of Baku State University and the Azerbaijan Pedagogical University in this success. E.Alizade also drew attention to the support of ANAS leadership provided to the Institute of Geography which is an incentive for new achievements.

PhD in geography Maharram Hasanov stressed, that awarding of state prizes was the highest appreciation for each institute member. According to him, the high level of the monograph is also due to high exactingness of the academician Ramiz Mammadov.

Doctor of Geographical Sciences Zakir Eminov thanked the leadership of ANAS for their support and all the employees who were closely involved in the preparation of this work.

Habil Hagverdiyev, chairman of the trade union and head of department, corresponding member of ANAS Rauf Gardashov, scientific secretary Luiza Salayeva, D.Sc. in geography Mahammad Abduyev and others noted the great role of academician Ramiz Mammadov, head of the Institute in achievement due to his competence, vision, innovation and exactness. They shared their joy because of the appreciation of publication by the State, which increased respect to geography and geographers. the Institute, ammad Abduyev and others noted the great role of the head of the Institute, academician Ramiz Mammadovo took a c

In the final speech, Ramiz Mammadov has mentioned with great pride about awarding prizes to geographers, noting this is a third state award. He noted the Institute had great scientists which were awarded with prizes. He said: “I am very pleased that we are continuing this tradition with dignity. Three-volume monograph “Geography of the Republic of Azerbaijan” is not a work of only 4 people; it is the fruit of the work of the whole institute. If they ask me, what is the purpose of the book, I would say – Azerbaijan! In general, the object of research of geographers is Azerbaijan! Any citizen who read this book will understand, in such a rich country he lives, and what potential it has” 15 years ago, the academician felt an emptiness in geographical science and he proposed to write such a book. It is the result of many years of hard work.  He called a great success the assignment of the State Prizes to this work. At the same time, if it was not the care and attention of the leadership of ANAS, maybe this success would not be possible.

R.Mammadov emphasized the local and foreign scientists, senators and academics that gave their feedback on the book and wrote kind words about him. He expressed his gratitude to them.

The academician expressed gratitude to President Ilham Aliyev on his behalf and on behalf of the staff for the evaluation of Azerbaijani science.

He thanked the leadership of ANAS Akif Alizade and personally Fakhraddin Gadirov, as well as everyone who has put his work in the creation of this three-volume.