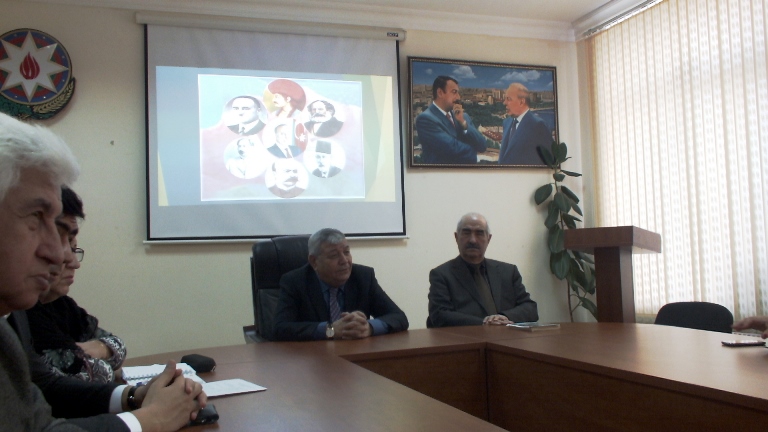 The Institute of Geography H.A.Aliyev held a meeting devoted to the 26th anniversary of the bloody events of 20 January.

First of all, everybody honored the memory of those who died for the freedom of his people. Academician Ramiz Mammadov, opening the meeting, noted that Azerbaijan achieved its independence with the blood of the victims of this tragedy and spoke about the importance and necessity of such measures. According to him, these events were tragic, but they could not break the will and the national pride of Azerbaijani people.

The chairman of Trade Union of the Institute PhD Habil Akhverdiyev said that on 20the of January have been inscribed in the history of the struggle for freedom and territorial integrity of Azerbaijan, as a heroism page and noted that he gave his life for the freedom of the honor and dignity of its people; its sons and daughters have set themselves to the rank of martyrs.

Halima Ahmadzade, the imployee of the Institute during display of video talked about the tragedy of the nationwide Day of Mourning, who became the most tragic day in the history of the Azerbaijani people. She also emphasized the activities of employees of the Institute of Geography, actively participated in the liberation movement of the time.

PhD in geography Anvar Aliyev, head of the Institute of Geography, the active member of the movement for independence, described the events he had witnessed, their causes, meetings of 1989, as well as their consequences.

He briefly spoke about his attitude to these events, numerous documents of a public nature, and other facts and documents which he included in his book “Secrets of the Place”.

of the Institute of Geography