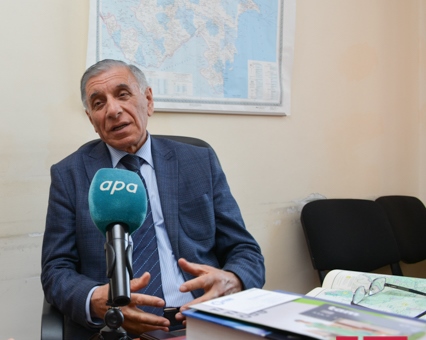 Interview with Professor, Doctor of Geographical Sciences Rza Makhmudov, Head of the Department of Hydrology and Water Resources of the Institute of Geography named after Acad. H.Aliyev to "apa" website.
According to the scientist, our country is rich in other natural resources, however, in terms of water resources, it belongs to the least developed countries due to its geographical location, and the quantitative and qualitative indicators of water resources depend mainly on transboundary river waters. Water resources are unevenly distributed throughout the country. Our relatively water-provided regions are the Sheki-Zagatala, Lankaran natural regions, the territories of the Lesser Caucasus. Our water resources are currently shrinking due to climate change.
Due to the impact of climate change, the annual flow of rivers is reduced by 15-20%. Numerous water pumps are installed on the Kura River, sand, stones and gravel are mined from the riverbeds, which cause a change in the flow of the rivers and deformation of the channel. The use of river water should be regulated on a scientific basis.
Until 1990, the total reserves of river water in the territory of Karabakh were estimated at 2.14 cubic km, currently this figure is 1.93 cubic km. That is, the rivers flowing through the territory of Karabakh are reduced to 10%. The potential of water resources here can increase the country's water resources by 5-6%.
In his interview, the scientist also clarified the issue of lowering the water level in the Caspian Sea.