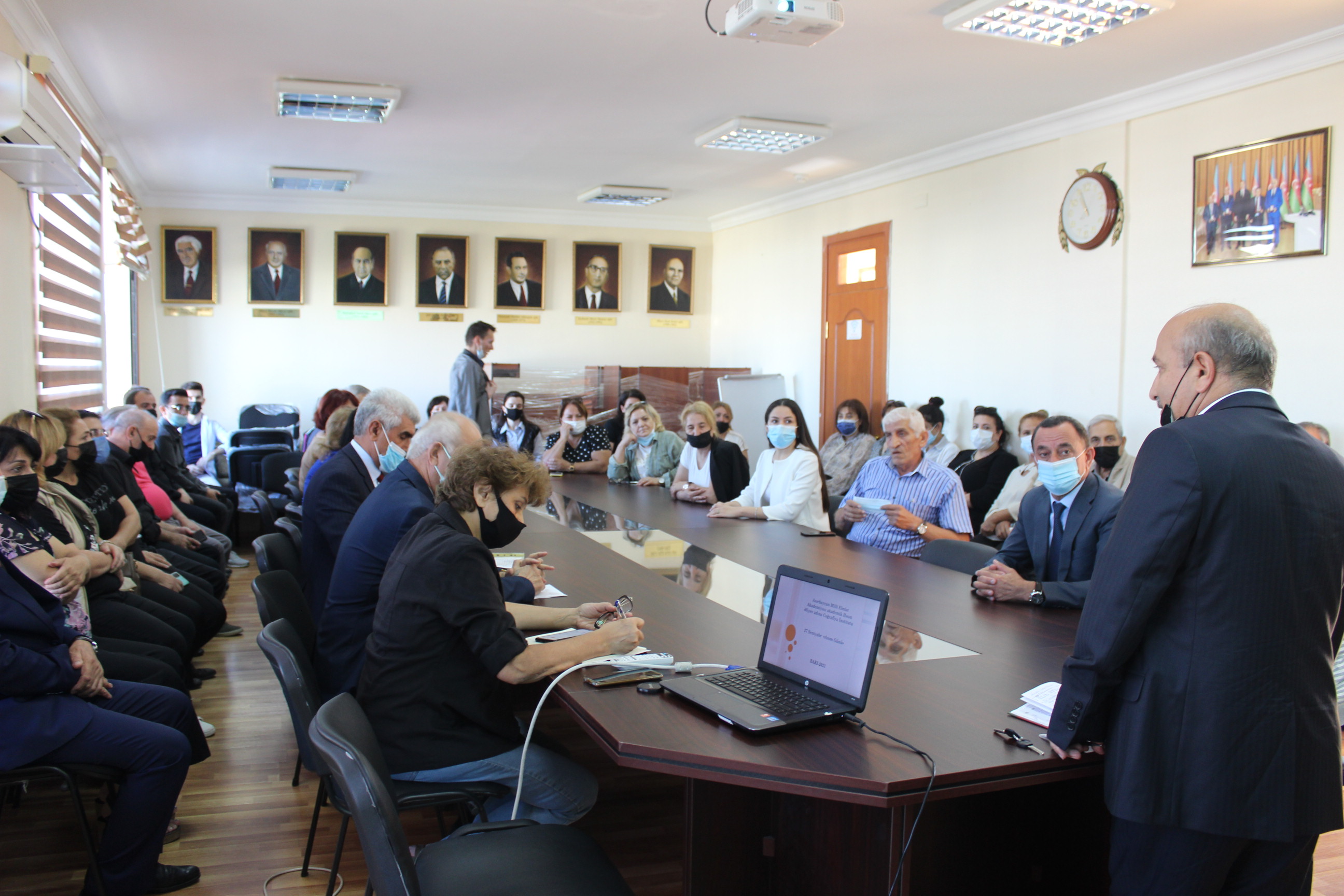 September 27 Institute of Geography named after acad. H. Aliyev of ANAS celebrated the Day of Remembrance.

First of all, they honored the memory of the martyrs who died for our lands with a minute of silence.

Opening the event, General Director of the Institute, Doctor of Geographical Sciences Zakir Eminov recalled that September 27 in Azerbaijan will be annually celebrated as the Day of Remembrance by the decree of the President of the Republic. He stressed that this date is the beginning of a just war, which our people have been waiting for for years and which brought freedom to our lands. Our people believed in the correct policy of the President, Supreme Commander-in-Chief Ilham Aliyev, as well as in the fighting efficiency and might of our army and hoped that the war would end in victory. But it was hard to believe that this issue would be resolved in 44 days. Our faithful and staunch sons gave their lives for their Motherland and returned to their lands, which had been under Armenian occupation for years. The incredible heroism of our soldiers and officers gave us the joy of this victory and increased our self-confidence. For centuries, the Azerbaijani people fought for their freedom and shed blood against the invaders who wanted to own our lands. The last Patriotic War, which we won in battles, will remain the most memorable and glorious war in history. Azerbaijan has proved that anyone who reaches the lands of such a brave, brave country will be crushed by an "iron fist". Azerbaijan has realized that it should not "rely" on international organizations from the outside that serve double standards, do not comply with their own laws and, where appropriate, justify the perpetrators they need. Possessing strength, intelligence and honor, Azerbaijan proved to everyone that it is able to solve in just 44 days what international organizations have not been able to do in 30 years. Now, as a leading country in the region, Azerbaijan is carrying out large-scale construction and restoration work. He quickly builds roads, builds houses, villages and cities, revives agriculture and economy in the territory of Karabakh, liberated from the wild Armenian barbarians, so that the displaced people can return home as soon as possible. The Institute of Geography is also in a hurry to contribute to the preparation of the geography of Karabakh, which is dedicated to the great victory.

At the end of his speech, the head of the institute wished God's mercy to our martyrs, who gave their lives for the freedom of our lands, and healing to our wounded veterans.

Speaking about the heroic battle of our heroic army in the 44-day Karabakh war, the chairman of the trade union of the institute, candidate of technical sciences, associate professor Gabil Hagverdiyev said that the great victory was the result of the thoughtful policy of President Ilham Aliyev and military strategy and tactics, as well as the excellent combat training of our soldiers and officers.

Then the head of the department of ecogeography, candidate of sciences, associate professor Anvar Aliyev made a presentation on the economy, agriculture, ecology of the country during the First and Second Karabakh wars. He spoke about the damage, noting that the amount of damage is measured in trillions.

At the end of the event, a video was shown about the care and attention of the Institute staff to the families of martyrs and veterans.