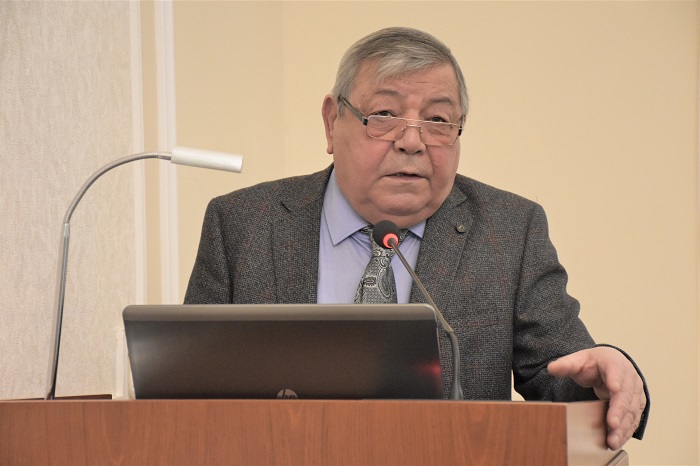 Academician made a presentation at the republican scientific seminar 2021-02-18 03:52:00 / IMPORTANT EVENTS

Director of the Institute of Geography named after acad. G.A. Aliyev of ANAS, academician Ramiz Mammadov made a presentation at the republican scientific seminar held at the Institute of Geology and Geophysics of ANAS on the topic "Global climate change as the main challenge of our planet, their manifestations in Azerbaijan."

Opening the event, Director of the Institute of Geology and Geophysics, Academician Akif Alizadeh noted that the phenomena of climate change observed in the world in recent years have not spared Azerbaijan either. He recalled the research work carried out by the country's scientists in this direction, noting that among the research works the research of academician Ramiz Mammadov was especially highlighted, and gave him the floor for a report.

Academician R. Mamedov spoke in detail about the theoretical foundations of climate change, forecast models, the results obtained for Azerbaijan on the basis of models and scenarios proposed by the Interstate Group of Experts, as well as about the climatic parameters observed in the country. He also explained the impact of climate change on the level of the Caspian Sea, agriculture and human health in the country through facts, figures, diagrams and answered questions from participants.

The seminar participants spoke about the report and highly appreciated the research of academician Ramiz Mammadov in this direction.