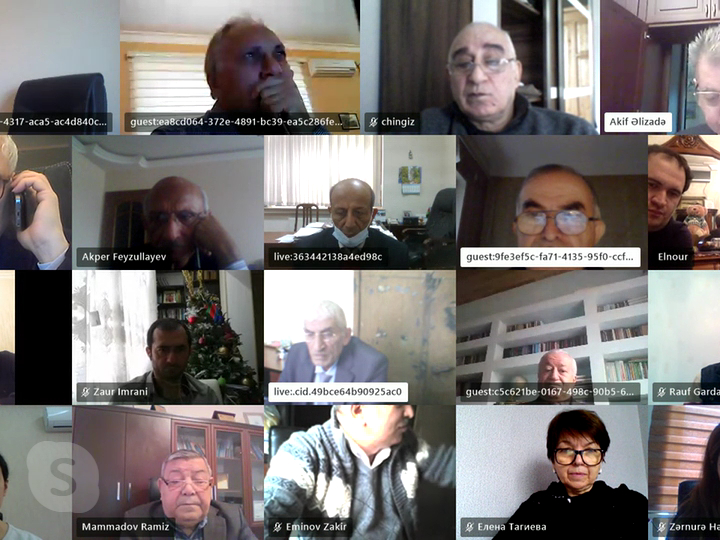 The annual reporting meeting of the Institute of Geography acad. H. Aliyev of ANAS together with the Department of Earth Sciences.

The chairman of the meeting F. Gadirov gave the floor to the director of the institute, academician Ramiz Mammadov, to present the scientific and scientific-organizational activities of the Institute of Geography in 2020.

The head of the enterprise informed about the relevant decrees and orders of the President of the Republic of Azerbaijan, the Cabinet of Ministers, as well as about the work done in connection with the implementation of state programs and the active participation of employees of the Institute of Geography in their implementation.

It was noted that in 2020, the employees carried out their scientific activities on the basis of two tasks - the study of the patterns of development of Azerbaijani nature, natural resources and their ecological and geographical features, economic, geographical and political problems of production, social infrastructure and territorial organization, as well as the ecosystem of the Caspian Sea.

The academician gave detailed information about academic publishing activities, the integration of science and education, personnel training, the state of electronic science, the implementation of grant projects, the activities of the institute's website in the direction of promoting science, etc. He noted that the fundamental work "Geography and Ethnos of the Turkic World", first published in all countries of the Turkic world, 2 volumes of which in Azerbaijani and 1 volume in Russian, 10 monographs, 2 issues of the journal "Geography and Natural Resources". 1 textbook, 33 scientific articles abroad, 69 scientific articles (7 in journals with the highest impact factor).

Mammadov spoke about the current business cooperation between research and higher educational institutions in Germany, Iran and Moldova. One staff member was sent to the University of Montana in Austria to conduct research.

The scientist noted the work of the expedition, its results on studying the situation on the Kura River and eliminating problems. Analysis of the dynamics of the Kura's freshwater ecosystems shows that the difficulty of providing the population with fresh water is the result of an ecological imbalance in a number of freshwater ecosystems in Azerbaijan due to unscientific economic activity and climate change. In order to highlight the tense environmental situation and raise public awareness, employees clarified the problem through more than 15 speeches and interviews in the media and on television.

The academician noted that the variability of the Caspian Sea level is the main research object of the Institute of Geography. Thus, this variability greatly affects the socio-economic situation of the coastal countries and is an important condition for the sustainable development of the territory, as well as ensuring a quality life for the population. In this regard, the research carried out by the Institute in this direction is important.

He also emphasized the importance of the research carried out at the Institute on the sustainable and prospective development of agriculture and animal husbandry in Azerbaijan.

In conclusion, academician Fakhraddin Gadirov noted the successes of the Institute of Geography in 2020 and positively assessed the Institute's annual report.