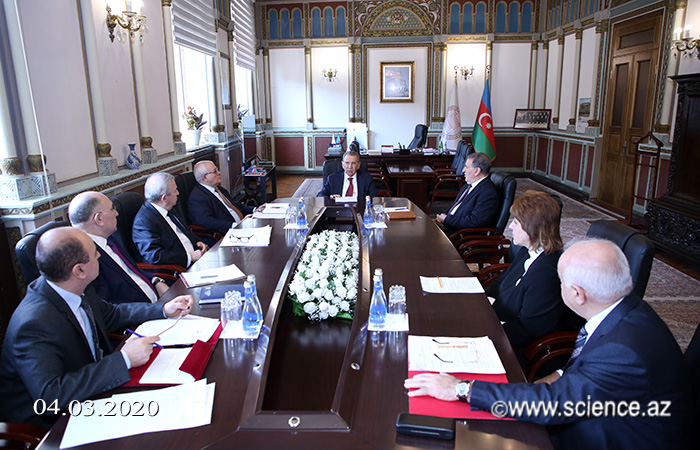 On March 4, a regular meeting of the Presidium of the Azerbaijan National Academy of Sciences was held.

Opening the event, President of ANAS academician Ramiz Mehdiyev acquainted those present with the issues on the agenda.

First, the first vice-president of ANAS, academician Isa Habibbayli spoke about the forthcoming five-volume edition “Chronicle of Freedom: The History of Independence of the Republic of Azerbaijan”. After discussing issues related to the idea, content, structure, editorial board and authorship of work, a resolution of the Presidium was adopted, according to which the editor-in-chief of the upcoming multi-volume was approved - the president of ANAS, academician Ramiz Mehdiyev, as well as the authors' team, which included 10 human.

The next issue for discussion was the Action Plan related to the 75th anniversary of ANAS. In his speech on this issue, ANAS academician Secretary, ANAS corresponding Member Aminaga Sadigov said that in order to ensure the 75th anniversary of the Azerbaijan National Academy of Sciences in 2020, a high resolution was adopted by the ANAS Presidium. He noted that, based on the proposals put forward by the scientific departments, scientific institutions and organizations of ANAS, the divisions and apparatus of the Presidium of ANAS, an Action Plan was developed. After discussing issues related to the Action Plan and its implementation, an appropriate resolution was adopted.

Speaking about the Action Plan for the implementation of the "ANAS Development Program for 2020-2025", the academician-secretary of ANAS Aminaga Sadigov spoke about the main goals of this program. He said that the Development Program includes the implementation of comprehensive measures aimed at addressing issues such as maintaining and developing scientific and technical potential, improving systems for organizing, managing and financing science, training highly specialized personnel, and directing research priorities to address social and social issues. economic and socio-cultural problems of the state, the integration of science and education, strengthening the regulatory framework and information support of science, improving the social security of researchers, etc. After discussion, the Action Plan for the implementation of the Development Program, approved by the decree of the Presidium of ANAS of December 28, 2019, was approved.

Then, ANAS corresponding Member Aminaga Sadigov spoke about the implementation in 2019 of the ANAS Action Plan for the implementation of the tasks set in strategic roadmaps for the main sectors of the economy of the Republic of Azerbaijan for 2019-2020. The Presidium evaluated the activity of ANAS institutions in implementing the Action Plan and adopted a corresponding resolution.

The vice- president of ANAS, academician Irada Huseynova spoke about making partial changes to the structure of the Institute of Dendrology of ANAS. In connection with this issue, an appropriate resolution was adopted.

Further, ANAS academician-secretary Aminaga Sadigov spoke about the Second International Scientific Conference “Multidisciplinary Approaches to Solving Modern Problems of Basic and Applied Sciences”, which is being held with the organizational support of the Council of Young Scientists and Specialists of ANAS. He spoke about the youth policy in the country, the active participation of young people in all spheres of public life, and the events held in ANAS in connection with the development of intellectual youth. The academician-secretary noted that the conference will allow intellectual youth, which is the vanguard part of domestic youth, to present to the public the scientific results they have received and will expand opportunities for international scientific cooperation.

The following decision was related to the transfer of doctoral students and dissertators to scientific institutions of ANAS. According to the adopted resolution, in order to continue his studies in the Ph.D. training program, a group of doctoral students and dissertants of the abolished Department for the Conservation of Biological Diversity and the Development of Protected Areas of the Ministry of Ecology and Natural Resources of the Republic of Azerbaijan, the Scientific Research Institute of Hydrometeorology, the Scientific Research Institute of Fisheries and the Scientific Research and Training Center for Labor and Social Issues under the auspices of the Ministry of Labor and Social Protection of the Population of the Republic of Azerbaijan, was transferred to doctoral studies and thesis of the corresponding institutes of ANAS .

The other resolution approved the annual amount of tuition fees for doctoral and dissertation studies of ANAS for training programs for doctors of philosophy and doctors of sciences in the relevant specialties for both citizens of the republic and foreigners and stateless persons.