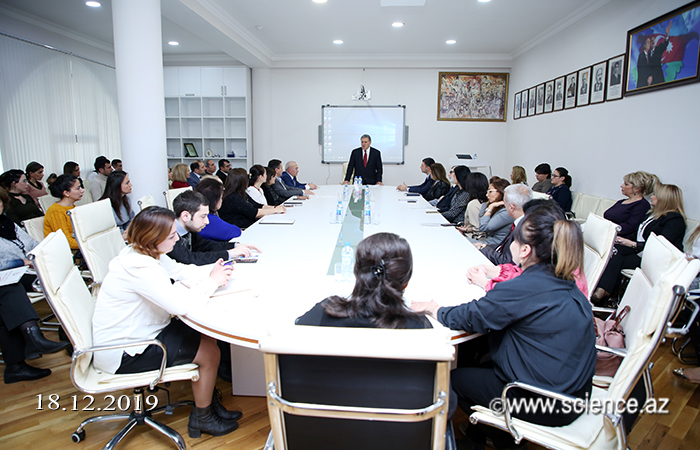 On December 18, in the Electronic Assembly hall of the Institute of Literature named after Nizami Ganjavi ANAS, the report meeting of the Public Relations Departments of the institutes and organizations of the Academy for 2019 was held.

The meeting was organized by the Department of Public Relations, Press and Information of the Presidium of ANAS.

According to Habibbayli, the relations between the Department of Public Relations, Press and Information of ANAS and the mass media of the country should be expanded, and the work on promotion of Azerbaijani science in the country and in the world should be accelerated.

"Employees of the Public Relations Department of ANAS should pay special attention to the preparation of scientific and analytical materials," I. Habibbeyli said.

Speaking about the work of science.az, official website of ANAS, I. Habibbayli said that recently the portal has improved. The scientist said that measures were taken to establish the work of ANAS's "Elm" (Science) newspaper, as well as journal "Elm ve Heyat" (Science and Life).

Academician I. Habibbayli informed about his visit to Moscow and noted that he had met with the leadership of the Russian Institute of World Literature named after Maksim Gorky and discussed the exchange of experience between websites of the two organizations.

Vice-president of ANAS emphasized the importance of establishing relations between public relations departments and Wikipedia, noting the invaluable role of this online encyclopedia in promoting Azerbaijan around the world. He said that the main task of the ANAS is to convey Azerbaijan's truths to the world community and to maintain its statehood position.

Then head Department of Public Relations, Press and Information, PhD in Philology Aghahuseyn Shukurov delivered a report. He provided statistics on news published on the science.az web portal and said that in the reporting year, there were about 2,300 news articles posted on the site, and more than 900 videos were broadcast by the Elm TV.

A.Shukurov also informed about the activity of the “Elm” newspaper, the press-service of the Presidium of ANAS, as well as the journal "Science and Life". He said that during the year, the Elm newspaper published informative and analytical articles covering various fields of Azerbaijani science. The journal "Science and Life" contains interviews and articles of Azerbaijani scientists living outside the country and working in various scientific centers around the world.

Subsequently, Dr. Zaur Aghamaliyev, PhD in technical sciences, delivered a report of the website of the Institute of Petrochemical Processes, Mahsati Gurbanova - Institute of Botany, and provided information about statistical indicators of the information elucidated in the media during the reporting year, as well as work done in the direction of promoting scientific achievements of the institute.