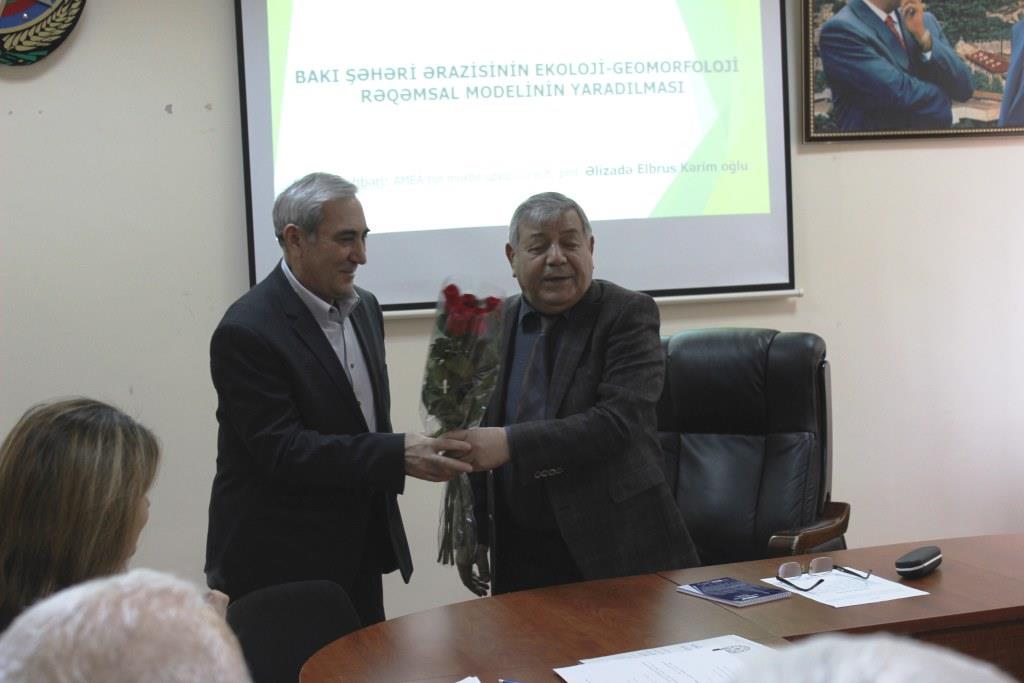 The next scientific seminar of February 8 of the Institute of Geography named after acad. H.Aliyev was held, chaired by academician Ramiz Mammadov. Two research projects were heard. First of all, the Director of the Institute, R.Mammadov, congratulated the researcher of the

department of Paleogeography Aliyar Aliyev his 70th birthday and on behalf of the staff wished him success in his personal life and scientific activity.

Then, Seymur Mammadov delivered a report on the research work carried out by him in the framework of the grant project entitled “Creation of ecological and geomorphological digital model of the city of Baku.

The researcher analyzed the geomorphic processes occurring in the territory of the city, prepared a digital elevation model of the territory based on satellite radar data, compiled geomorphological digital 1:50 000 large scale map, a number of morphometric maps and a map of landscape hazard.

All areas with landslide danger in Baku were analyzed in detail and detailed digital relief models of these areas have been created. On this basis, the areas with potential landslide hazard were marked in the studied area.

It was found that along with the natural factors that contribute to the emergence landslide processes, man-made factors have a central role in their activation and acquiring destructive power.

Furthermore, are analyzed in detail the processes of erosion, especially gullies. The speaker gave information about urban planning.

Given the practical importance of the topic, Academician R. Mammadov recommended to send the results of research work to relevant organizations - the State Committee for Urban Planning and Architecture, and executive power of Baku city.

And also, they may be translated into English and published in one of the foreign scientific journals.

The study was performed according to the steps. A large-scale landscape and geomorphological map of the territory has been composed on GIS technology. Exo-dynamic processes, especially the formation of debris flows, their development and threat have been assessed on the basis of the deciphering data of digital satellite images of recent years.

A landscape framework plan was drawn for the geosystems of the pool Kishchay- Damiraparanchay.

As a result, both reports were highly appreciated by seminar participants and it was recommended to the authors to make reports on these issues at a meeting of the Division of Earth Sciences.