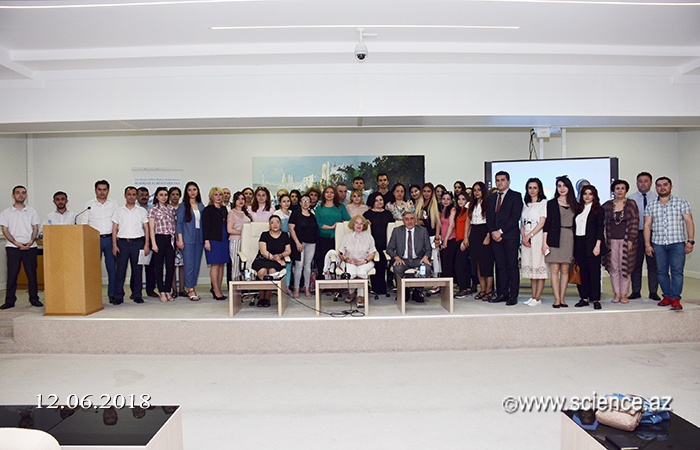 Today, at the conference hall of ANAS Central Scientific Library was held the meeting with the deputy editor-in-chief of the printed organ of the Russian Academy of Sciences - the newspaper "Poisk" Elizaveta Ponarina. The purpose of the meeting was to share knowledge and experience related to the activities of the newspaper "Search", the role of the media in the popularization and advancement of science, works aimed at professionalizing scientific journalists.

In the meeting held by the organizational support of ANAS Office of Public Relations and Science Popularization, representatives of the public relations departments of institutes and organizations of ANAS took part.

Opening the event, head of the Office Zulfugar Farzaliyev noted the importance of studying international experience in the field of popularization and propaganda of science and stressed that the coverage of the activities of the Academy in foreign newspapers and magazines and electronic media plays an important role in the propaganda of Azerbaijani science throughout the world.

Talking about close cooperation between ANAS and the newspaper "Poisk" of the Russian Academy of Sciences, Z.Farzaliyev brought to attention that the publication regularly publishes a series of articles devoted to the Azerbaijani science. Noting that the cooperation with the newspaper had acquired a traditional character, head of the department said that articles about the scientific achievements of institutions and organizations are of great interest to the Russian scientific community.

He said that, deputy editor-in-chief of the newspaper "Poisk" Elizaveta Ponarina, having visited the Ganja Division of ANAS, Naftalan and Goranboy, was acquainted with the conducted research and works.

Then, scientific journalist Elizaveta Ponarina noting that, the newspaper "Poisk" is 30 years, and gave detailed information on the activities of the printed organ. She spoke about the departments of the newspaper and cooperation with scientific foundations. Noting that, scientific journalism is also a profession, which has its own peculiarities, rules and creative secrets, rapporteur highlighted the points that are needed to create high-quality materials.

Speaking about the important moments of a successful dialogue between journalists and scientists, E.Ponarina stressed that, it is not easy to write about dynamically developing science and scientific research in the modern era: "Masters of the pen must first of all constantly enrich their knowledge, be aware of modern problems of science, spend more time in laboratories, often communicate with scientists and take interest in their activities and take part in conferences and seminars." According to her, a journalist should be able to write qualitatively on any topic, otherwise he will not be able to keep up with the dynamically developing science: "It is necessary to read regularly popular scientific literature about modern and complex problems of science. For example, molecular biology, genetics, bioengineering and other areas require journalists to have a deeper knowledge: "Imagine that, behind every article, and even behind each line, is hard work, and sometimes sleepless nights." It was noted that a person claiming the status of a scientific journalist should have a rich worldview and an intellectual base, a passionate desire to write and create.

Then, the deputy editor-in-chief respondent the questions.