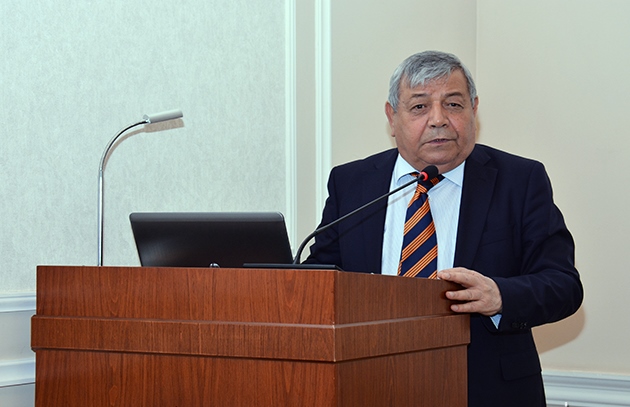 Issues concerning the Insitute of Geography in the regular meeting of the department of Earth Sciences 2017-05-18 16:00:00 / IMPORTANT EVENTS

On May 18, at a regular meeting of the Earth Sciences department, the director of the Institute of Geography, academician Ramiz Mammadov informed about the measures arising from the Order of the President of the Republic of Azerbaijan of March 2, 2016, “On the Edition of the Atlas on Emergency Situations of Azerbaijan Republic. The purpose of publishing the atlas is to ue natural resources efficiently, to protect people, settlements, industrial and agricultural institutions, other infrastrucure facilities, including strategic oil and gas pipelines, communication lines, as well as to resolve issues of developing productive forces.

The academician reported that the structure headed by him developed 20 atlases. He noted important the meeting of the editorial board members, approved by the President of State for this task.

They were heard speeches of candidates who applied for vacant positions as head of the department at the Institute of Geography.

It was also decided to nominate the associate professor, PhD in geography Maharram Hasanov, to the position of Deputy Director for scientific work of the Institute of Geography.