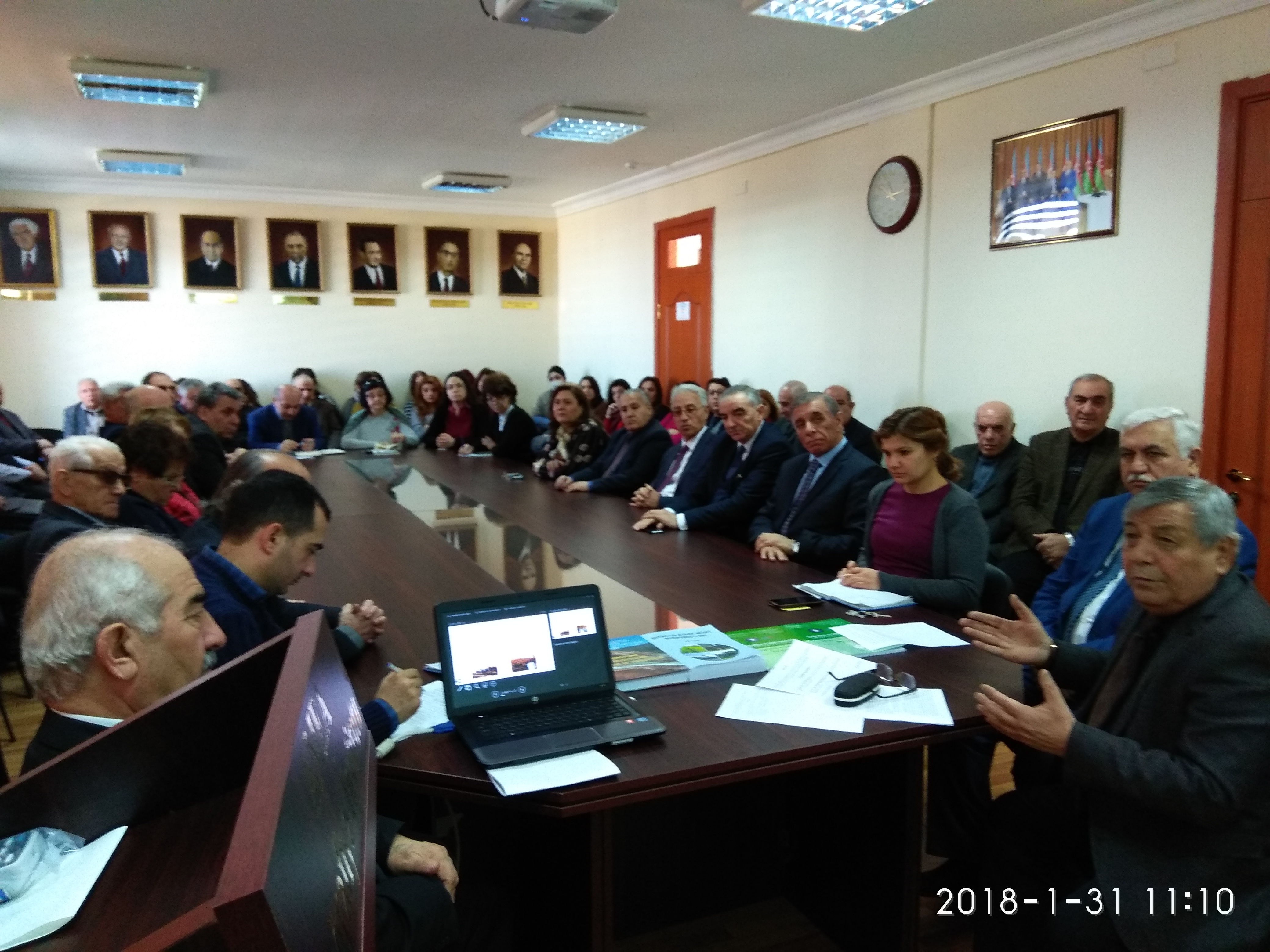 January 31, the annual reporting meeting of the Azerbaijan Geographic Society took place at the Institute of Geography named after acad. H.Aliyev of ANAS. The  event was attended by members of the presidium of the AGS, heads of departments of geography of universities.

President of AGS, acad. Ramiz Mammadov made a detailed report for 2017. He noted that having completed the descriptive function, geography turned into a fundamental science of studying the laws of the development of society and natural phenomena in their interrelations and separately.

The main function of the AGS is to regularly inform th epublic of the dynamics of the developmemnt of geographic science in Azerbaijan, the successes achived.

Academician Ramiz Mammadov told about important events of 2017, about the activities of regional branches of AGS, conferenced, international relations, expeditions, speeches of scientists in the media, etc. He stressed the importance of the project under the motto “We will recognize Azerbaijan”.

Speaking about new publications of the AGS, the president of the society named the 2 issues of the journal “Geography and natural resources”, XIX and XX volumes of scientific works of the AGS and IG.

Much has been done for the unity of science and education, training seminars have been organized for students of the 10th grade of Baku secondary schools in the field and in the IG, meetings were held with students, masters and graduate students.

Then R.Mammadov acquainted with the events envisaged in 2018. Four conferences are expected, including the topic “Studying the problems of inland water basins-a case study of the Caspian Sea basin” Eurasia-GIS Conference 2018”.

The 10th AGS congress will be held in Agdash city of Azerbaijan. Another regional scientific conference is planned simultaneously with the congress. Its theme is “Geographic problems of Azerbaijan” is envisaged.

At his suggestion, it was decided to include in the organizational committee of the congress, along with the staff of the IG, representatives of the branches of the AGS from BSU, ASPU, Ganja, Lenkoran, Sumgayit.

Scientific secretary of the AGS, PhD Mirnukh Ismayilov, informed about the work of the secretariat in 2017. He underlined  the activity of employees for the propagation of geographical science, like in the preceding years. He pointed to the rapid reaction of workers to various natural and destructive phenomena on the territory of the republic, such as landslides, mud volcanoes, etc.

The head of the department of BSU, doctor of technical sciences, professor Tapdyg Hasanov, highly appreciated the activity of the society. He considered it necessary to accelerate the work of the Society in the regions.

The Dean of the Faculty of History and geography of the Azerbaijan State Pedagogical University, doc. Shahin Panahov, appreciated the activities of the AGS and suggested organizing a meeting with the the Society. At the same time, he considered it expediant to create a Youth department within the AGS.

All speakers recognized the work of the Society positive and wished its members great success in 2018.

The activity of the Azerbaijan Geographic Society in 2017 unanimously adopted with a good estimate.