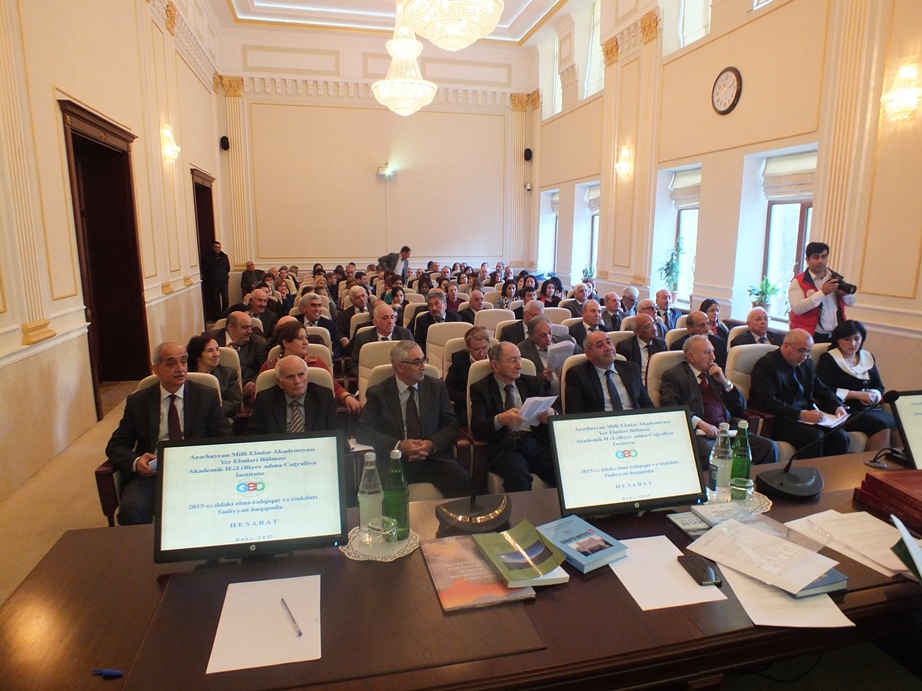 The academician-secretary of the Department acad. Fakhraddin Gadirov who was the chairman of the meeting welcomed the participants with opening remarks and the agenda.

Then acad. Ramiz Mammadov, Director of the Institute of Geography presented the annual report. He spoke about the great achievement reached in the course of carried research works and gave information about the correlations of the fundamental science with education, the international relations and grants, state of electronics, publishing activity, conferences, meeting, seminars, anniversaries and other implemented works. The academician spoke about the execution of Decrees and Orders signed by the head of country Mr. Ilham Aliyev and informed the participants about the priorities demographic issues, the importance of which the President of Azerbaijan emphasized at the ceremony of 70th anniversary of ANAS. The Director also reminded the 70th anniversary of the Institute of Geography, as well as spoke about the events that took place at the Institute and also regions of the country.

The Secretary of the Department acad. F.Gadirov summed up the discussion: “The Institute of Geography is one of the leading research organizations. It was created the same year when ANAS was established. It has its own traditions in terms of scientific and organizational activities. In a short period, it became one of the well-known institutions in the former Soviet Union and now is among the prominent institutions of ANAS.

The discussion took place on the definition and implementation of fundamental and practical research in accordance with the preparation of a new economic model of nonoil sector. The proposals were adopted with some amendments.

At the end, F.Gadirov awarded a group of employees of the Institute of Geography with Certificate of Merit of the Earth Sciences Department on the occasion of the 70th anniversary of ANAS.

of the Institute of Geography