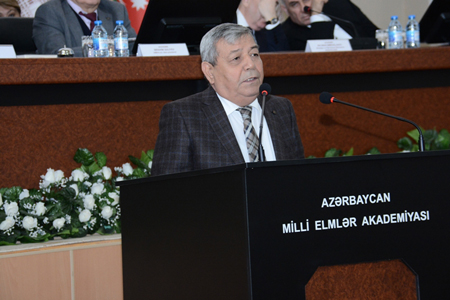 Text of the speech by academician Ramiz Mammadov at the enlarged meeting of the Presidium of ANAS, devoted to the discussion of scientific priorities put forward by President Ilham Aliyev at a general meeting on the occasion of the 70th anniversary of ANAS

This sign of attention is an incentive for further activities of employees. This event was a real celebration for the Institute. All this is perceived as a success of our institute. We express its appreciation to the Head of State.

One of the issues that President Ilham Aliyev touched upon during a speech at an event to mark the 70th anniversary of ANAS, was the question of demographic development and population growth.

In 1990, in Azerbaijan, the natural population increase per 1000 people was 19-20 people. In the mid-90s, this number consisted 8-9 people: “However, after the adoption by the Head of State, Ilham Aliyev, of Demographic Development Program in 2004, the natural increase of the population in 1000 increased from 9 to 13-14 people”.

Today the country has an average annual population growth of 1, 2%. This indicator is much higher than in neighboring Georgia and Armenia.

As always, the president of the country is modern. In the western geography the human geography is the main direction. The President noted that in the West, human geography is one of the modern and extensive areas of research. This question is a kind of appeal for geographers. So we thought to create in our Institute the Department of Humanities, and as part of the department will operate the lab of demographic development and population geography, socio-economic and political geography and the geography of the scientific foundation for the development of tourism.

The development of tourism is one of the main issues raised by President Ilham Aliyev. Indeed, many in the country are engaged in tourism. At the same time, as the Academy of Sciences, we set a goal to explore scientific problems of this sector and to apply them. Created departments will work on several major areas. First is the settlement of the population by areas and height. It is a fact that the population density is varied by areas. If in the Absheron Peninsula the density is high, then devastation of heights is in process. However, observations show that in some mountain villages population is growing.

In the department, will be considered areas such as natural and anthropogenic factors of population settlement in a variety of natural and geographical areas, and administrative and economic areas; infrastructure issues of settlement and demographic development (roads, railways, hospitals, schools, post office, and the supply of drinking water and water for agriculture, power supply); creation of new jobs, depending on altitude, relief, vegetation. It is important to tackle the issue of crisis of the demographic potential of Absheron. The issue of the development of small and medium-sized cities in the administrative district centers will help to prevent the influx of population in the Absheron peninsula and open there jobs. Currently, the total weight of the working-age population is 71.8%, which creates a serious inconsistency in the age composition of the population.

In the next 10-15 years, the population of retirement age, and its share in the total population will increase by several times. This will creates difficulties in providing work. Works will be held in urban planning, prevention of demographic crisis and the development of regional centers of urban type. We have included this in our work plan. Thank you!