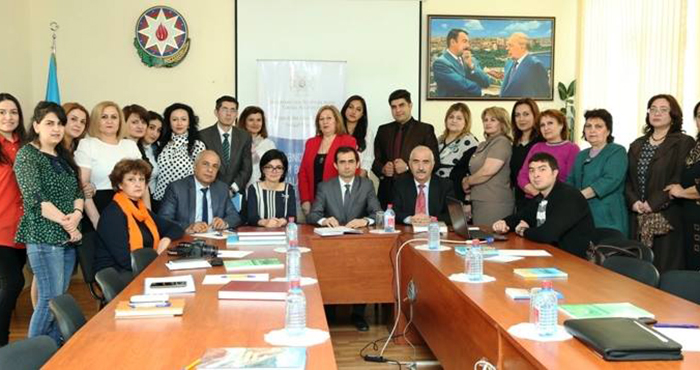 A roundtable was held on the theme "The role of geographical knowledge in acquiring the skills of youth in the field of tourism" 2017-04-27 13:53:00 / EVENTS

The roundtable was held on April 27, 2017 on "The role of geographical knowledge in acquiring the skills of youth in the field of tourism", organized by the Center for the development of Children and Youth under the Ministry of Education and the Institute of Geography named academician H.A.Aliyev of ANAS.

The main purpose of the event was to arouse the youth’s interest in travel, walks, excursions and summer tourism.

The event was attended by the head and representatives of the Center for the Development of Children and Youth, scientists and staff of the Institute of Geography, teachers of the geography of secondary schools and media. The presenter of the roundtable was Zaur Imrani, head of the Department of geography of tourism and recreation.

In his report “Modern problems of tourism development in Azerbaijan” PhD in geography, docent Nariman Pashayev, spoke about positive and negative factors affecting the development of tourism.

He noted the special attention of the Head of State, President Ilham Aliyev, to this area.

Firuza Sultanzade, director of the Center for the Development of Children and Youth reported on the approaches and requirements for the development of tourism for children and youh.

The coordinator of the information department in the Ministry of Education, Elchin Sardarov, recalled the master classes of the director of the Institute of Geography, academician Ramiz Mammadov, in secondary school number 160 and other educational institutions.

The deputy director of the Center for Young Tourists and Regional studies Salima Allahverdiyeva, expressed her desire to hold such meeting more often, given their importance.