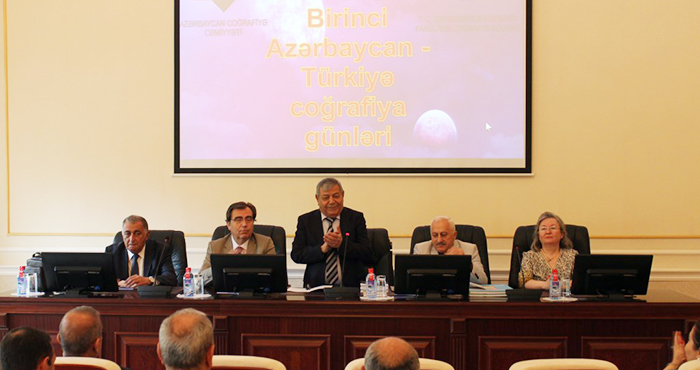 On the first day of the event held at the Academy of Public Administration under the President of the Republic of Azerbaijan, discussions were held on the priorities of Azerbaijan foreign policy, an exchange of opinions and discussions on scientific research in the field of geography of Turkey and Azerbaijan. In the afternoon, a round table took place on the theme “Expansion of ties and geographical approaches”. Later the guests made a familiarization tour around the city.

The next day the conference continued its work with reports and discussions in the assembly hall of the Azerbaijan National Academy of Sciences.

President of the Azerbaijan Geographic Society, director of the Institute of Geography named after acad. H.A.Aliyev of ANAS, Ramiz Mammadov, greeting the guests, congratulated them on the First Azerbaijani – Turkish Days of Geography. He noted that this event will encourage joint activities and research. R.Mammadov stressed that the creation of the “Institute of Geography of the Turkic World was one of the cherished desires of the prominent scientist-geographer Budag Budagov. The Turkic World is a huge space, which opens wide opportunities for activity. The academician called on the geographers of both countries to work actively together.

Professor, Dr Ertug Onar expressed his joy at the arrival in the brotherly country and noted the excellent level of the organization of the event. He talked about his work at the Aegean University.

Then, according to the program, they made scientific reports on paleo-geographic and archaeologic studies of Turkey on the shores of the Aegean and Mediterranean seas, on global climate changes in Azerbaijan, the current state of the water reserves of Azerbaijan, the changing position of Turkey in the migration system.

After the meeting, the participants walked in the city. On May 4, a trip to Shamakha region was carried out: Astrophysical Observatory named after N. Tusi and Biogeographic Station of the Institute of geography of ANAS. The next day, May 5, a trip to the Gobustan State Historical and Artistic Reserve took place.