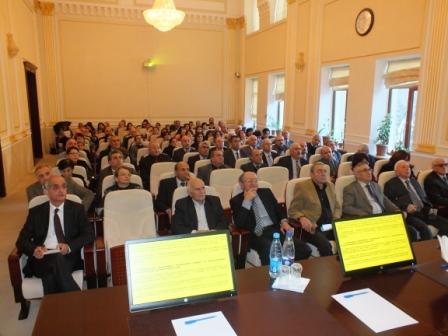 On 25 December 2014, was held the report meeting of the Department of Earth Sciences of ANAS on the scientific and organizational activity in 2014.

At the meeting, took part Fahraddin Qadirov, full member of Academy of sciences, academician-secretary of the department of Earth Sciences of ANAS, executors of the most important scientific projects, heads of departments and other relevant organizations.

The Director of the Institute of Geography, acad. Ramiz Mammadov, made a report on the activities of the Institute and said that two problems have been performed in 2014, according to research plan.

1.Development regularities of Azerbaijani nature; study of natural resources and their ecogeographical features; economic-geographical and political problems of territorial organization of the population, production and social infrastructure.

2.Complex research works have been implemented in the field ofCaspian Seaecosystem.Significant results have been achieved.

225 research scientific works have been submitted, 142 of which published.

(2 monographs, 1 book, 137 articles, including 68 published aboard, 2 textbooks and 9 school supplies). 22 articles have been published in journals with impact factor.

This year, the National Atlas was published, while its nearly 180 maps have been edited by the employees of the Institute.

The information book reflecting the activity of the Institute of Geography have been developed in 3 languages (Azerbaijani, Russian and English).The English version was published.

In 2014, the Institute of Geography was the organizer of 2 international, 1 republican conference and 2 jubilee birthdays. This year, 2 persons were elected correspondent members of ANAS, and 1 person was elected a full member of ANAS.10 young professionals sent to the international trainings returned with licenses validating their acquired skills and knowledge.

Speaking about the activities of the Institute, R. Mammadov noted 40 scientific seminars held in the reporting year, the Coordinating Council, the Council of Young Scientists and Specialists.

At the end, he suggested the following proposals:advisability of extension of the engineer and laboratory assistant staffto recruit talented young researchers; building of Pirgulu station on geographical researches needs repair; financial support for the publication of 3-volume book “Geography of Azerbaijan”, prepared by the staff of the Institute.

Then prof. Farda Imanov, dean of the faculty of geography of Baku State University spoke about updating of some maps of the National Atlas, a need to strengthen the areaof the economic geography, increasing attention to waterproblems, integration between organizations, coordination, conducting of joint work of the Institute of Geography and Baku State University during scientific researches. He positively evaluated the report.

Prof. Tapdiq Hasanov, head of the department of geographical sciences noted that in his comprehensive, analytical report acad. R. Mammadov gave an analysis of problems of some regions, which could serve as a model in conducting researches.