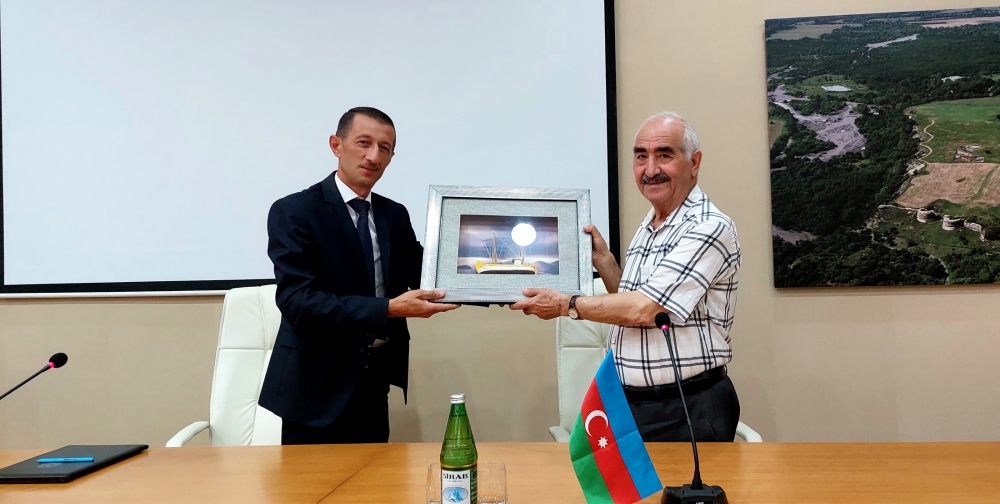 An event was held at the Gabala Archaeological Center with the joint participation of the Institute of Geography named after Academician H.A. Aliyev of ANAS, the Azerbaijan Geographical Society and the Gabala State Historical and Artistic Reserve.
Employees of the Institute, who visited Gabala within the framework of the "Year of Shushi", visited the Archaeological Center and got acquainted with the archaeological excavations. Visitors to the exhibition halls of the Gabala Archaeological Center received detailed information about the archaeological research being carried out here.
Then the event continued in the assembly hall of the Gabala Archaeological Center. Head of the Department of the Institute of Geography, Chairman of the Trade Union of the Institute, Ph.D. Habil Hagverdiyev spoke about the geographical position of Shusha, the cradle of Azerbaijani culture, its rich historical and cultural heritage, as well as the work carried out over the 30 years of occupation to restore the territories destroyed by Armenian vandals.
The director of the reserve, Zahir Kerimov, spoke about the world-famous Gabala State Historical and Artistic Reserve and the only Gabala Archaeological Center in the country, created on the initiative, organizational and financial support of SEBA (Seoul-Baku) of the Korean-Azerbaijani Cultural Exchange Association. Giving information about public and private organizations with which the reserve closely cooperates, the director suggested mutual cooperation and information exchange with the Institute of Geography.
The scientific secretary of the institute, Zarnura Gamidova, thanked the management of the reserve for the attention and care of scientists, especially employees of the Institute of Geography, who visited the Center.
The director of the reserve presented a gift to the head of the delegation, Habil Hagverdiyev, and to a resident of Shusha, junior researcher Zaur Gasimov, a photograph showing the view of Shusha before the occupation.
After the meeting, the participants visited the Albanian church in Gabala. Chairman of the Albanian-Udi Christian community Robert Mobili provided visitors with interesting information about the work done, showed documents and photographs proving that there are no historical monuments of Armenians in Azerbaijan and that Albanian churches in Karabakh do not belong to Armenians.
Commemorative photographs were taken at the end.