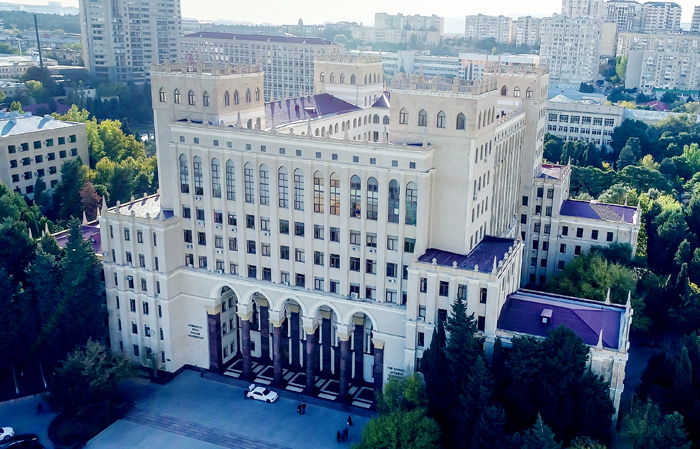 On June 10, General Online Meeting of the Azerbaijan National Academy of Sciences dedicated to the results of scientific, scientific and organizational activities of ANAS in 2019was held.

Initially, President of ANAS, academician Ramiz Mehdiyev acquainted the participants with the issues on the agenda.

At the meeting, a minute of silence was honored the memory of the late scientists who made a significant contribution to the development of domestic science.

Then, academician Ramiz Mehdiyev made an opening speech in which he noted that in 2019, considerable successes were achieved in the scientific field. Having said that the head of state always pays special attention to the development of science in Azerbaijan, the academician added that in his activity ANAS is guided by decrees, orders and instructions of President Ilham Aliyev. He said that the main activities of the Academy were measures aimed at preserving and developing scientific and technical potential, training highly specialized personnel, coordinating scientific research, and directing research results to the country's socio-economic, cultural and moral development.

Academician Ramiz Mehdiyev noted that at the last General Meeting of ANAS, the new composition of the Presidium of the Academy was approved, the “National Program for the Development of ANAS for the 2020-2025s” was adopted, new priority directions for the development of domestic science were identified, important changes and additions were made to the Charter of the Academy. In addition, over the past period, a new structure of the apparatus of the Presidium of ANAS was determined, some negative cases observed in staffing, financing and innovation policy were eliminated. The ANAS leader said that comprehensive measures aimed at international scientific cooperation, the integration of science and education, training highly specialized personnel, building innovative policies on new foundations, obtaining extrabudgetary funds, and strengthening the material and technical base of the Academy continue to be implemented.

Academician Ramiz Mehdiyev also noted that at a time when the coronavirus pandemic became a serious test for all mankind, comprehensive measures were taken under the direct supervision of President Ilham Aliyev, thanks to a sound policy and multifaceted proactive measures, positive results were obtained aimed at protecting human health and ensuring social protection of the population. He said that Azerbaijan is the author of a number of international initiatives in this area. Emphasizing the initiatives of the head of state in connection with the summits of the Cooperation Council of Turkic-speaking States and the Non-Aligned Movement, Academician Ramiz Mehdiyev added that the discussions that took place at these events and the resolutions adopted made a significant contribution to the process of overcoming the crisis created by the pandemic; The Azerbaijani model of the fight against coronavirus was highly praised by reputable international organizations of the world, including the World Health Organization.

ANAS leader noted that the pandemic and emerging new realities once again emphasized the need for the development of fundamental and applied scientific research around the world; The National Academy of Sciences of Azerbaijan, which is the main center of such research in the country, faces important tasks. He said that the organization he led had already prepared relevant proposals to combat the pandemic and the challenges facing the post-pandemic period, identified specific tasks. The scientist emphasized that in the first place it is necessary to pay attention to the development of biological and medical sciences, to further expand research in the field of molecular biotechnology, microbiology, immunology, virology and infectious diseases. The academician noted that social and human sciences also face important tasks, there is a serious need for integrating sociology, economics and other scientific sectors at a new level, expanding multidisciplinary research; important measures are being taken in the country to develop the non-oil sector, branch out economic sectors, and reduce dependence on oil and gas revenues. He added that one of the important tasks of the Academy is to participate more actively in building a knowledge society. Academician Ramiz Mehdiyev emphasized that scientists should participate in the development of new economic models in accordance with the requirements of national economic security, study such relevant scientific fields as bio, nano, information technologies, etc., conduct the necessary research aimed at the formation of a national industry software products.

Then the academician-secretary of ANAS, corresponding member of Aminaga Sadigov delivered a lecture on the scientific, scientific and organizational activities of the Academy in 2019. He noted that in 2019, President of Azerbaijan Ilham Aliyev signed about 40 decrees and orders in the field of science. A. Sadigov brought to the attention that ANAS scientists took part in the implementation of about 20 state programs covering social issues serving the development of industry, agriculture, the country's economy, art and culture, healthcare, research and preservation of the history and language of Azerbaijan. performed a number of research projects and other projects.

The relevant decisions of the General Meeting approved the chairman and composition of the ANAS Statutory Commission, as well as the proposed additions and amendments to the Charter of the National Academy of Sciences of Azerbaijan were adopted and submitted for approval to the President of the country. Corresponding amendments to the Charter of ANAS were approved by Decree of the President of the country dated April 10, 2020 No. 986.

The academician-secretary added that the “ANAS Development Program for 2020–2025” was approved by the decision of the ANAS General Meeting of December 28, 2019. The development program for the next five years covers the identification of priority areas of scientific research, carrying out structural reforms and improving management, modernizing the scientific infrastructure, strengthening the integration of science, education and the economy, improving the financing of science, improving the social security of scientists and other issues.

He also noted that the new structure, management system and organizational system of the Presidium of ANAS has been improved, a number of important measures have been taken for the purposeful coordination of the activities of scientific institutions.

Aminaga Sadigov noted that in the reporting year, 1618 research works on 542 topics, covering 147 problems, 34 of which found their practical application, were carried out in scientific institutions that are part of the scientific divisions of ANAS. Work continued on 159 grants, 36 patents received.

The scientist added that in the reporting year 139 important scientific results were obtained in the scientific institutions of ANAS. Academy scientists published 518 books, published 9431 articles and abstracts, including 3107 articles and abstracts were published abroad. 1,051 articles published in impact factor journals have been cited more than 20,500 times. Over the entire period (1975-2019), more than 17,000 scientific works were included in the database “Web of Science” from domestic scientific and higher educational institutions. More than 12,000 (more than 71%) of these scientific works are accounted for by ANAS. In 2019, 708 scientific works of ANAS were included in the Web of Science database, and these works were cited more than 2,000 times. According to him, in 2019 ANAS took 775th place among 5637 universities and research institutions in the world in the Scopus database. According to social indicators, the ANAS scientific rating ranks first among the academies of the South Caucasus and Central Asia. Currently, 5 of 68 ANAS scientific journals are included in the Web of Science database.

It was noted that by the decision of the Cabinet of Ministers of the Republic of Azerbaijan dated January 30, 2020, the composition of the Council for the Coordination of Scientific Research was increased from 15 to 26 people.

Noting that within the framework of the Nizami project, with the support of the Institute of Information Technologies, a national management portal for doctoral studies was created with the aim of restructuring and developing doctoral studies in Azerbaijan in accordance with the requirements of the European Higher Education Area, the scientific secretary brought to attention that between ANAS and the University of Montpellier France signed a framework cooperation agreement, as well as a model individual agreement in connection with the education in doctoral studies.

It was noted that, by order of the State Examination Center, 120 people were admitted to the magistracy of ANAS in 22 specialties. In the academic year 2018/2019, ANAS graduated from 63 undergraduates in 12 specialties and 37 specializations.

According to the scientist, in 2019 the international scientific relations of ANAS expanded even more. More than 500 ANAS employees were on business trips abroad and won bilateral and multilateral joint projects presented by their colleagues from different countries. Research continued on the implementation of 2 projects under the Horizon 2020 program, 1 with the support of the Korea Institute for Science and Technology Policy (STEPI), 8 with the support of the Ukrainian Science and Technology Center, as well as ATLAS and ALICE projects with CERN and BNTİ.

Aminaga Sadigov noted that in 2019, work continued on the formation and development of electronic science and information support for science, which is a segment of electronic Azerbaijan, a number of results were achieved, various information systems and websites were launched. It was noted that the issues of integrating cyberphysical systems into the electronic scientific environment were studied and effective solutions were presented, questions of the formation of civilian scientific projects were studied, and a generalized conceptual model was developed. Work continued on expanding the infrastructure of the AzScienceNet Scientific Computer Network, the electronic science network platform, storing the resources of scientific institutions and ANAS organizations in the AzScienceNet network data center and supporting hosting services, efficient use of its resources, and integration into the European scientific and educational space.

It was noted that youth policy was successfully continued by the ANAS leadership in 2019, like every year. Today, Azerbaijan National Academy of Sciences is considered the largest intellectual force in the country, since it consists of more than 3,000 students, masters, doctoral students and scientists who form the Council of Young Scientists and Specialists. A number of competitions were organized, such as “Master in 2019”, “Young Women in Science”, “Young Chemists in Science” for young scientists under the age of 35 with a doctorate in ANAS, as well as other awards aimed at supporting intellectual the activities of young scientists and the promotion of science.

At the end of his speech, ANAS Academician Secretary Aminaga Sadigov spoke about the problems and prospects facing ANAS, the need for targeted measures to develop the non-oil sector, commercialize scientific results and strengthen innovation. He noted the problems arising in connection with the implementation of the “ANAS Development Program for 2020–2025” and the feasibility of implementing a number of tasks to ensure the development of science in accordance with global challenges.