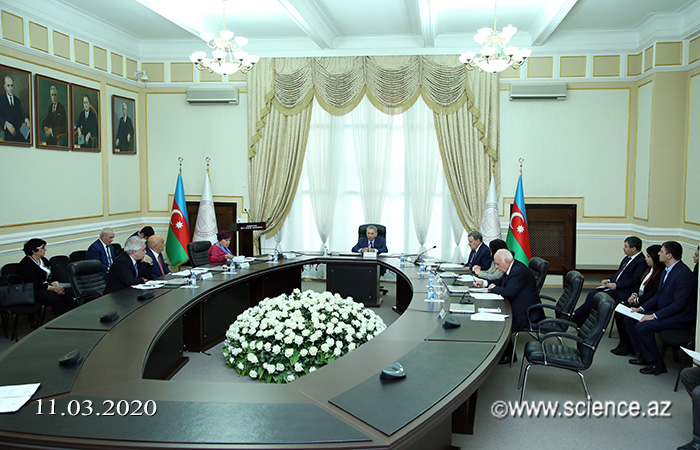 A meeting was held at the Presidium of the ANAS in connection with the creation and fields of activity of the Azerbaijan Scientific-Ideological Center.

Speaking about the importance of the center in the light of the political and ideological appeals of President Ilham Aliyev, the President of ANAS, academician Ramiz Mehdiyev spoke about the goals of the meeting. The academician said that the formation of Azerbaijanism as the ideological foundation of an independent Azerbaijan state and its transformation into an ideology of unity and solidarity of all world Azerbaijanis is a historical merit of the national leader Heydar Aliyev. Having said that the ideology of Azerbaijanism, which has great historical significance, reflects the national interests of the people and statehood, academician Ramiz Mehdiyev emphasized that the ideology of Azerbaijanism, which meets national interests, serves the development of our language, culture, national and moral values, as well as the upbringing of the young generation in accordance with these values.

Noting that in the life of peoples and societies the idea and ideology differ from each other in their specific features and essence, academician Ramiz Mehdiyev added that various approaches are observed in books and articles on Azerbaijan, as well as in opinions expressed in the media. The head of the academy emphasized that it is necessary to study the ideology of Azerbaijan from a political, historical, philosophical, literary point of view and conduct research and propaganda work in this area at the center, which is being created as part of the academy on a voluntary basis.

In his speech at the meeting, the first vice-president of ANAS, academician Isa Habibbayli called the creation of such a center at the academy an important scientific and historical event. He noted that the scientific and ideological center faces such important tasks as the study and promotion of the centuries-old traditions of national statehood, the processes of formation and development of the idea of Azerbaijanism from ideal to ideology. The academician said that in the study of the ideology of an independent state, the scientists of the departments of humanitarian and social sciences of ANAS have a great responsibility. He emphasized that the studies that were conducted in domestic science, especially in the academy in connection with Azerbaijan, were not systemic in nature, as a result of which there was a serious need for conceptual research.

At the end of the event, such issues as the holding of the scientific conference "The Ideal of Azerbaijanism: From Idea to Ideology", the preparation and publication of the monograph "Azerbaijan: the Origin, the Formation Processes and its Transformation into the Ideology of National Statehood" created by the Presidium of ANAS, were discussed, preparation and publication of articles on periodicals and scientific publications of articles on the issues of Azerbaijanism, regular seminars entitled "Azerbaijanism: in history and in modern times."