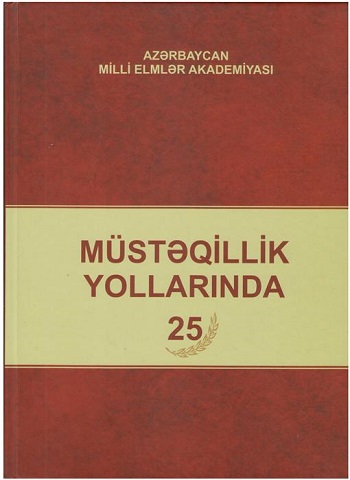 On the occasion of the 25 anniversary of independence of the Republic of Azerbaijan, the National Academy of Sciences of Azerbaijan has published a collection of articles under the title “Towards Independence 25”, edited by the head of the Presidential Administration of Azerbaijan, academician Ramiz Mehdiyev.

The book, which begins with his article entitled “The state independence: the phenomenon of Heydar Aliyev and the modern period”, refers to the 25 years of glorious independent path traversed by the republic and its achievements.

The book consists of three chapters and over 600 pages, 100 of which are the fruit of the labor of employees the Institute of Geography named after acad. Hasan Aliyev. The authors of the third chapter section “Realities of population geography: dynamics of development, resettlement, resources and perspectives” are acad. Ramiz Mammadov, D. of G. Emin Zakirov and PhD in G. Nizami Eyyubov. The texts relating to a natural population growth, migration, population dynamics, human resources and their use, urban and rural settlement, geo-economic areas of settlement, strategic and geopolitical importance of its management, regularities of the distribution of population, are supplied with maps, tables and graphs.

The articles show the realities of population geography in the years of independence, problems of formation of the modern geo-demographic conditions, processes of natural population growth, etc. with graphic and cartographic analysis.