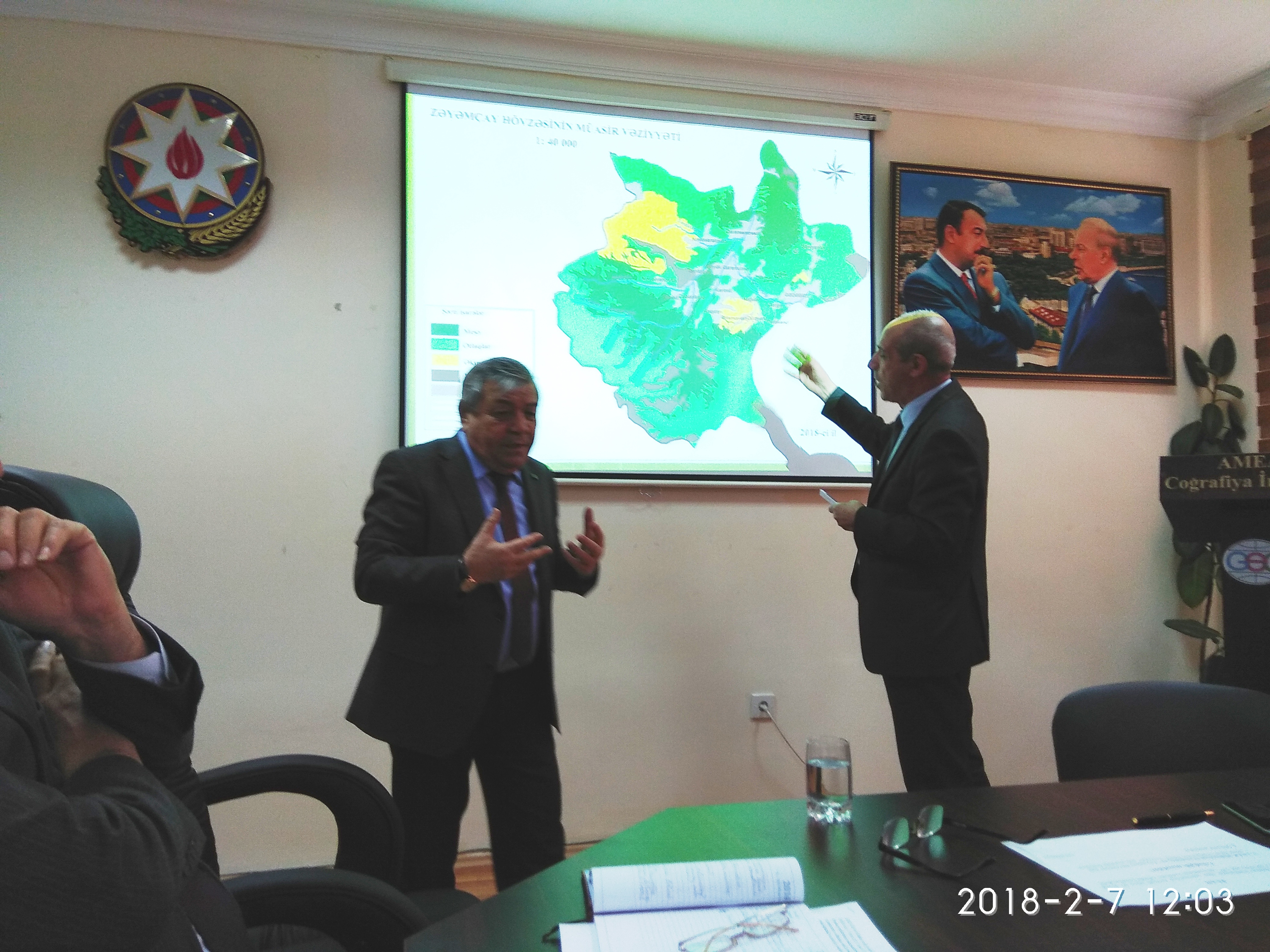 The next scientific seminar of IG was held the Institute of Geography named after acad. H. Aliyev of ANAS under the chairmanship of academician Ramiz Mammadov.

PhD in geography, senior researcher of IG, Mahammad Mammadov, made a report on the theme: ”The current state of brown mountain-forest soils in the Zeyemchay Basin”.

On the basis of long-term soil studies, laboratory analysis and long-term monitoring, the scientist established that over 50-60 years, as a result of intensified anthropogenic impact on brown mountain-forest soils, erosion processes accelerated, violating genetic soil layers, the quantity and reserves decreased by 20-25% of nutrients and humus.

Comparing the long-term results, M.Mammadov came to the conclusion that, in the Zeyemchay basin, gray-brown mountain-forest soils are the most susceptible to anthropogenic degradation. Due to their use in agriculture, their natural morphogenetic features have been violated, and many parameters have changed in comparison with the natural state.

It was said that, in recent years, the supply of gas to people in the zone of brown mountain-forest soil have reduced the influence of man on the surrounding nature. This is reflected in the natural rehabilitation of plants in the ecosystem of the desert and forests. In the near future, the soil cover will be restored and improved if the process is stable.

The academician Ramiz Mammadov spoke about the importance of the Scientific Workshops, which were legalized on Wednesdays at the IG, being an indicator of the image and level of the research institute. It is very important to discuss the results of research, to check scientific assumptions and opinions. This is the main function of the seminars. Another function is to find interesting joint projects. The head of the institute considers it necessary to involve scientific staf in the meeting with various themes in the field of their research.

Then the guest of the meeting, the senior lecturer of Nakhchivan State University, who was the chairman of the Organization of Composers for 15 years, author of 40 songs, Shamsaddin Gasimov.

He shared his impressions of the scientific seminar. According to him, this is his first participation in a scientific meeting, and he is very proud of this fact. He highly appreciated the ability of Academician Ramiz Mammadov of conducting a scientific workshop, expressing one’s own scientific position in specific questions.

The academician R.Mammadov expressed his gratitude to the guest, noting the great interest from outside to the workshops, full of heated discussions, held always on Wednesdays.

“Because of the large number of people wishing to attend these meetings, it is difficult to find a place, but, at the same time, our doors are always open for those who wish participate”.