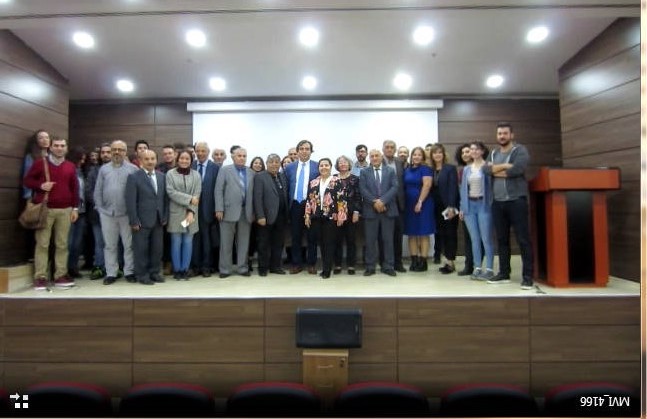 From 24 to 27 October, 2017, the Second Azerbaijani-Turkish Geography Days were organized by the Azerbaijan Geographic Society in cooperation with the Department of Geography of the Literary Department of the Aegean University.

The rector of the Aegean University prof. Dr. Necdet Budak welcomed the guests and stressed that the Second Azerbaijani-Turkish Geography Days will provide an opportunity for further expansion of joint scientific ties between Turkish and Azerbaijani geographers.

President of the Azerbaijan Geographic Society, director of the Institute of Geography named after acad. H.A.Aliyev of ANAS, Ramiz Mammadov, conveyed the greetings of Azerbaijani geographers to their colleagues and expressed confidence that these meetings will contribute to a fundamental turn in the field of scientific relations.

At plenary sessions and sections held on various themes, the scientists of the Institute of Geography made the following presentations.

Academician Ramiz Mammadov “The raison for variability of the level and the long-term forecast of the Caspian Sea”, Dr. Sc. in Geography Mahammad Abduyev “Quality of the river waters of Azerbaijan and their role in providing drinking water” and Dr. Sc. in Geography Zakir Eminov “Main trends of the demographic situation in the modern world and changes in Turkic countries”; Dr.Sc. g. Mirnukh Ismayilov on the theme “Structural and genetic features and natural ecological potential of the East Caucasian intermountain lowland”, and Elshan Abdullayev on the theme “Properties of clay minerals in the Lower Pliocene sediments on the western shore of the Southern Caspian”.

The academician visited the Center of Oceanology of the Aegean University, where he made a presentation on the theme “Global climate changes and fluctuations in the level of the Caspian Sea”.

Head of the Direction of Human Geography of the Institute, Zakir Eminov, made a report on “Main trends of demographic development in the Turkic countries”, at the conference on “Energy, the status of the Caspian Sea and the demographic situation in the Turkic countries” in the University Dokuz Eylül. Z. Eminov stressed that 60,000 students study free of charge at the university and that free education is provided in all state universities in Turkey.

During the meeting at the Second Azerbaijani-Turkish Geography Days, R.Mammadov proposed to realize the idea of a prominent geographer scientist, academician Budag Budagov, about the creation of the linguistic diversity of the geography of the Turkic world, and this initiative was accepted with great pleasure.

R. Mammadov and other speakers welcomed the joint development of research themes, grant projects, interchange of doctoral students and dissertators between geographers of the fraternal countries. They expressed confidence that these relations will have appositive impact on the development of geographical science in both countries and will push them to new achievements.